Who doesn’t love ringing in the new year with a toast of bubbly (for those old enough) and watching fireworks light the sky? Kids old and young love the festivities surrounding the holiday, but safety is unfortunately not always put first as a primary concern. Every year, thousands of people get hurt playing with fireworks. While it’s always safer to abstain from the DIY firework shows, people can’t seem to quit the tradition in favor of a safer celebration. With this being said, allow your Houston fire protection company to talk about the risks involved with popular fireworks and how you can still have fun without causing injury.

We’d bet that you won’t go to a New Year’s Eve party without these babies being part of the firework display. What makes these so dangerous is that even with proper handling, they can jam and cause an explosion in the tube, resulting in injury. Every year, reports pour in about children blowing off fingers and receiving serious burns from these tubes of fire. 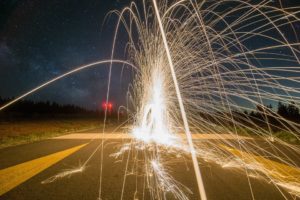 For whatever reason, sparklers are seen as more child-friendly as opposed to other fireworks. Many parents hand their children sparklers to parade around with every year. Sparklers are anything but a safer firework compared to other firework types. What parents don’t know is that these babies burn at around 2000 degrees, making it hot enough to melt certain metals. The sparks that fly off these sparklers can easily fly off onto clothing, causing clothes to ignite. Another issue with this type of firework is that children often drop them on their feet while they’re still lit. As with Roman Candles, many children suffer bad burns from sparklers.

Like Roman Candles, people use bottle rockets to fire at others as a game of war. Roman Candles are anything but a game. They are credited with blinding and seriously injuring thousands of people every year. The lucky ones are left with ‘impaired’ vision, but either way, the damage is irreversible.

These fireworks might seem safer because they’re meant to be used on the ground, but as we’ve learned, no firework is safe for use. All of the individual firecrackers are linked together and go off in order, causing loud noises. These fireworks often jump and can move unpredictably, making them a hazard.

These are never a good idea. What many firework consumers don’t know is that m-class fireworks are made illegally without much, if any quality control. Many times, the fuses on these fireworks are short and can easily cause injury to the person lighting them.

We hope that regardless of what you do this New Year’s Eve, you do it safely with fire safety in mind. Avoid fireworks altogether if they are illegal in your area and opt for a local firework show instead. If you decide to partake in fireworks, be sure to follow the precautions listed above. As always, call your Houston fire protection company for repairs, maintenance, and reconditioning.