Skip to content
Installing a sprinkler system does not mean you have to choose water damage over fire damage.  What most people think they know about sprinklers they learned from movies that incorrectly show systems spray entire rooms from every sprinkler—usually caused by smoke.  This myth persists even though sprinklers have never actually worked they way movies tend to show them.  If this sort of movie fiction actually happened during a fire, they certainly could do more harm than good. Fortunately, the wonderful engineers who came up with the idea of sprinkler systems designed them to be efficient reducers of damage to your property from water, smoke, and fire.
As technology has advanced, the quality of sprinkler systems has advanced too.  Many years ago they were much more unreliable and could cause the sort of widespread water damage usually depicted in cinema.  However, today’s sprinkler systems are credited with reducing deaths and property losses by more than 65 percent.  Each individual sprinkler head in today’s systems is triggered by a fire=specific temperature, so only one or two sprinkler heads can quickly and efficiently contain a fire to the area or individual room where it started—often with minimal property damage. Since sprinklers use six times less water than a water hose, they usually cause much less property damage than you would suffer if you depended on the fire department only to extinguish a fire. 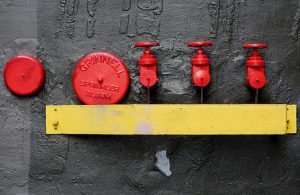 If you thought all you needed to protect your home or business was a smoke detector, think again.  Smoke detectors are not capable of putting out fires—as some people mistakenly believe.  They can alert you and/or the fire department, and they are an important part of any fire prevention system.  Nonetheless, having smoke alarms does not cancel out the need for a sprinkler system.  Together, both devices offer a formidable defense against potential property damage and loss of life.
When a fire starts, a smoke alarm can alert you to the danger, but it is then important to extinguish the fire source.  A fire quickly heats the air directly above it because hot air rises and is pushed out to either side when it contacts the ceiling.  When a sprinkler detects this heat, it is automatically activated to do its job.  False heat detection is unlikely to trigger a sprinkler head because it must detect the intense heat of between 135 and 165 degrees Fahrenheit. The sprinkler head is attached to a system of pipes that are usually hidden discretely behind walls or ceilings and are attached to a reliable water source.
When a sprinkler head is triggered, a valve to the pipe system is opened, pushing a high-pressure stream of water downward and out to the sides; thus, extinguishing the fire below it and preventing it from spreading.  Sprinkler systems continue to revolutionize fire safety by putting out fires long before a fire department could ever arrive and with much less risk to life and property.
The amount of time required by the process described above depends on the type of sprinkler system you choose.  If you want to learn more about how these amazing systems can protect your business, then please contact Advantage Interests Inc. today.