The general population uses the terms ‘fire alarm’ and ‘smoke detector’ interchangeably despite the fact that they provide two different functions. However, most people aren’t aware that these two devices are different. So, what is the difference between a fire alarm and a smoke detector and which is best for your business? As a Houston fire protection company, it’s our job to not only know the difference between the two but to also be able to assess your needs and guide you to the right option for your facility.

A smoke alarm is what you will traditionally find in a home. It’s a cheaper option than a fire alarm, but it’s ideal for detecting small amounts of smoke at an early stage. It can also be used in a commercial facility depending on the particular needs of that facility. Smoke alarms work by doing just as the name suggests- it senses smoke in the air which triggers the alarm. There are different types of smoke alarms- photoelectric alarms and ionization alarms. Photoelectric alarms use a beam of light and sensors to detect the presence of smoke. An ionization alarm utilizes a chamber that registers the accelerated movement of smoke. Another option is a dual-sensor that incorporates both a photoelectric and ionization for maximum detection and protection. Smoke alarms can work independently such as in a home, or as a connected unit in a large business.

Fire alarms are generally what you’ll find in businesses, schools, and other commercial facilities. Because of their higher cost and installation difficulty, you won’t find fire alarms in the majority of homes. These alarms measure the changes in combustion. There are many components that can be added to a fire alarm system as well, which is another big difference between it and a smoke alarm. Control panels for a fire alarm system are basically what you’d call the motherboard of the entire set up. This panel is what 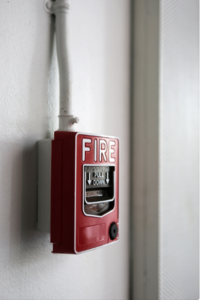 everything is hooked up to, making all the different components work together as one. Sprinkler systems are activated when smoke particles reach high levels. The good thing about sprinkler systems is that it can protect your facility from fire damage, but the downside is that it can contribute to water damage. Warning systems are an integral part of fire alarms because this is the system that sounds the alarm and gives a visual warning of danger (i.e. flashing lights). Some facilities might be interested in installing a fire alarm box. These are a typical part of a fire alarm system in schools. Most people know fire alarm boxes as being the pull-down mechanism that is there for people to pull and let others know of the danger. The best part of installing a fire alarm is that it adds an extra layer of protection of the facility, and it lasts longer than smoke detectors if it’s properly maintained.

While both types of alarms have some wonderful attributes as well as a few possible downfalls, it’s important to speak to an Advantage team member about your needs. While a fire alarm may seem like your best bet, it may not be right for the type of business you’re running. For further assessment into the perfect fire system for your facility give Advantage, your Houston fire protection company, a ring.