The importance of fire suppression for a Houston business is crucial, but it doesn’t just stop at a smoke alarm. Just having a smoke alarm to notify you and the fire department isn’t enough. Wouldn’t you prefer the fire be put out within minutes of it breaking out? One reliable solution is fire sprinklers. This isn’t meant to replace smoke detectors, as they also have a crucial role in Houston fire suppression. 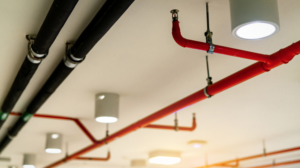 should also alert your local fire department. The hot air rises to reach the ceiling which will eventually reach the closest fire sprinkler and when the fire sprinkler heads detect a temperature between 135°F to 165°F it will activate.